I finally agreed to take on Ironman in Nice back in 2019. Covid caused several postponements, but three years later I found myself on the pebbly beach on the Cote D'Azur at 7:30am about to start the 2.4 mile swim. The sun was out although low, sea calm and clear and my supporters and teammates lined up.

Next thing I knew I was swimming and after a few goggle adjustments everything was going well. Just stay out of the crowds, stay smooth and it will soon be over. The swim was two legs out and back to the beach. First leg couldn't have gone better, second leg I found myself on the inside at the buoys and I got swum over and battered by other swimmers.

The low sun caused some direction issues and I was re-directed by a friendly kayaker, but 1 hour and 15 minutes later I was back on the beach and heading towards transition one.

With a bit of help undoing my wetsuit and a quick change I was heading out on my bike. Now for the tough part, a 112 mile bike ride. As I tucked into my Snickers bar I was cheered on by my wife and friends along the beautifully flat Promenade des Anglais. I was clicking along at 20mph. Happy days. But just behind the seafront are the pre-Alps and after 10 miles things took a turn! Uphill.

This ride goes from sea level to ski level. Literally! The first two pitches were horrible. Very steep and the temperature was now up towards the thirties. The gradient then settled down and I managed to push on at a reasonable speed. We had calculated that an average speed of 14mph would get us round in time.

In the “B-Team”(our rag tag club of triathletes) I am the elder statesman at the tender age of 60 but I am a good swimmer. On the climb Kyle soon came past but that was expected as he's in his 20's. Next, Pete the Power, came muscling through. "Don't panic, just keep going." The trick with all these endurance sports is to manage yourself so at every feed station I took on water, a salt tablet, and an energy bar.

After two hours I was at 28 miles. The climb was endless. At one point I could see a four mile snake of cyclists winding its way up the road ahead of me. Two more hours of climbing and I was behind schedule. 42 miles done, an hour behind. But then, the top was in sight and the freewheeling began. Lets go!

I soon came across another English competitor and we agreed this was so much better. However, he was better informed than me and he let on “there was another climb!” Only 8 miles long!

Soon we were back to our slow speed. It's funny what you think about on a long ride. I thought of my friend Sally who lost her fight with cancer two years ago. No matter how painful my ride was she would have swapped with me in a heart beat.

Suddenly I was at the top and the real descent began, 32 miles of it. Hoorah! The views were spectacular, scenery stunning but there wasn't much time to look. The descent was very technical and full concentration required. At the speed I was going I was making up my lost time at a rate of knots.

Soon I could see the Nice football stadium and the sea. As we made the last descent it was like riding into a sauna. The temperature now was 36 degrees in the sun. By 5pm I was back in transition two and tying up my running shoes.

Now for a Nice marathon. Four laps along the sea front to the airport and back. The first lap was very hot but with showers to run through and fruit and drinks every mile I soon had the first one done. Lap two was slower due to a coughing fit which brought on my asthma. Luckily, my old mate, Bryanman, was cycling along with me and he went ahead to find a Ventolin. Two down, two to go.

The next two laps were taken at two minutes jogging and two minutes walking pace. By this time I had befriended Fabrice, a local guy and we chatted in my poor French and his poor English. The most common phrase was “c'est dur”.

But then we found the finishing chute. The music was blaring, my wife Heidi and friends were cheering, the crowd was banging the hoardings. After 14 hours, 56 minutes I heard the announcer shout, ”BILL, YOU ARE AN IRONMAN!”

And that was it done. Probably the toughest day I have had but also one of the best. The bigger the struggle, the greater the victory. The next day we bumped into another competitor from England. He had done 10 Ironman races. In his words “Ironman Nice is the toughest Ironman”.

If a 60 year old asthmatic can get round Ironman Nice, you can too. You just have to set yourself a goal, train for it, and as they say “Anything is possible”. 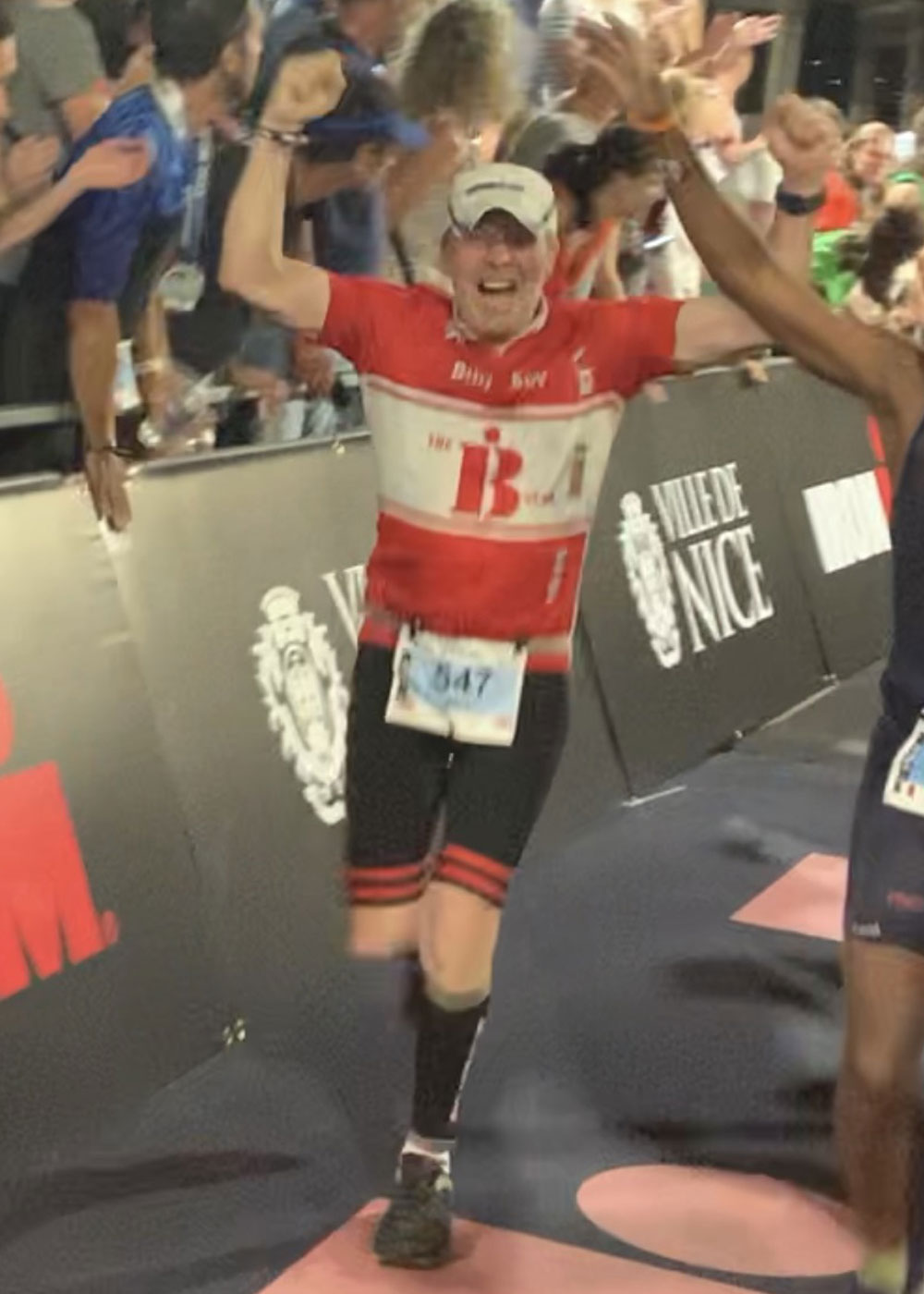